African countries are facing an onslaught of crises and need to adapt quickly. COVID-19, climate disruption, conflict and Russia’s war in Ukraine are causing severe pullbacks in food, fuel, debt and liquidity with no sign of slowing down.

The World Bank’s June 2022 Global Economic Prospects (GEP) report forecasts that the global economy is heading for years of weak growth and rising prices, with potentially destabilizing consequences for low- and middle-income economies. As these multiple crises deepened, the IMF’s Kristalina Georgieva warned at the recent G20 conference that the outlook for the global economy “has deteriorated significantly”. A period of prolonged global stagflation is likely and African countries are at risk. 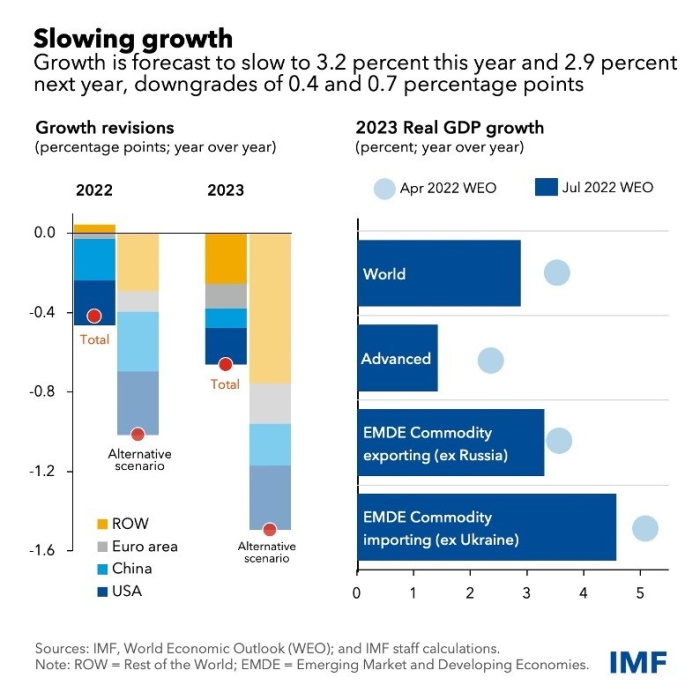 A period of prolonged global stagflation is likely and African countries are at risk. Image: International Monetary Fund

Africa’s urgent call for financial reform
What is alarming is that the global financial architecture designed over 50 years ago is no longer fit for purpose. Above all, it has failed Africa. A crisis is coming and many African countries are taking steps to protect themselves against this emerging threat.

While African leaders are actively trying to protect their economies, global rulers and politicians must also do their part and urgently reform the global financial architecture. As the world recovers from the economic shocks of COVID-19, near-term needs must not overshadow the urgency to repair a failing global system. If no action is taken to protect Africa, the cost of inaction and the resulting injustice will be global.

African leaders stepping up and taking action are calling for an urgent restructuring of the global financial architecture and outlining the reforms needed to ensure a faster and more stable global recovery.

“Inaction is not an option for Africa or the world. The continent’s spreading social unrest, debt problems and protracted political crises will have global implications,” said KY Amoako, founder and president of the African Center for Economic Transformation (ACET), at a recent meeting of the Transformation Leadership Panel, a panel of world leaders chaired by Ellen Johnson Sirleaf and coordinated by ACET.

TLP Member and Executive Secretary of the UN Economic Commission for Africa Vera Songwe added: “This is not just a crisis of poor getting poorer. Rising costs are hitting the African middle class hard. Fuel costs in Nigeria are so high that people cannot afford to drive to work.”

Masood Ahmed, a TLP member and President of the Center for Global Development, reiterated the urgency of the situation, stating: “The numerous crises currently affecting African countries, including debt overhang and the real possibility of countries defaulting, are becoming serious Consequences have domestic and political consequences. We need to create a greater sense of urgency and awareness of the realities African countries are facing.”

To avoid catastrophe, we have identified four steps on how to reform the global financial architecture to better serve Africa:

African countries are in dire need of fresh liquidity, which the IMF’s Special Drawing Rights (SDRs) can provide quickly. The SDR is not a currency. It is a potential entitlement to the freely usable currencies of IMF members that can provide liquidity to a country. This liquidity is essential to help African governments build and maintain basic social protection programs in the face of soaring food and fuel costs.

However, out of the original allocation of $650 billion in SDRs last August, only $33 billion – just 5% – has been allocated to Africa. Over a year ago, when the crisis was less severe, world leaders recognized the need to on-lend more SDRs to African governments. The need for a fair and efficient process for allocating SDRs is now more urgent than ever.

African leaders have called on the IMF to first accelerate the implementation of SDR redistribution mechanisms tailored to the needs of African economies. They have also called for the development of more appropriate allocation criteria. This would mean the issuance of new rights as well as a reallocation. Some of these additional Special Drawing Rights should be channeled through regional development banks such as the African Development Bank.

Step 2: Fix the Broken Debt Management Machinery
At the end of May 2022, 23 African countries were at high risk of a debt crisis or were already in one. The situation worsens with rising interest rates and Russia’s war in Ukraine. Debt relief must be rapid, comprehensive and extensive.

To facilitate debt resolution, the G20 has called on creditors to band together under a common framework. Progress has been excruciatingly slow, but in the past week there has been exciting news that Zambia has finally benefited from this framework, paving the way for a fund program in the country. African leaders are calling for improved multilateral debt restructuring frameworks to reposition debt as a catalyst for economic recovery and sustainable growth. Viable solutions are needed to ensure access to finance at competitive and non-disadvantaged interest rates.

Step 3: Expand Africa’s climate finance to drive global solutions
Despite contributing only 3.8% of global emissions, Africa has borne the brunt of climate change. Africa loses $7 billion to $15 billion annually due to climate change, and that number is expected to rise to $50 billion by 2040. The inadequacy of climate finance, the cost of undelivered climate finance and the neglected carbon market now require urgent attention in Africa.

At the same time, there are many opportunities for Africa to drive a green transformation. For example, market mechanisms can be developed that reward Africa for its carbon sequestration, providing funding for the continent’s green transformation. Ibrahim Mayaki, TLP Panel member and former CEO of AUDA-NEPAD, stressed the importance of increasing Africa’s climate action through carbon mitigation, job creation and agricultural transformation, while “offering some much-needed climate solutions to the planet . ”

Step 4: Rebuild trust and create a new global partnership for Africa
This is a critical year. Africa’s voice and collective positions must be loud and clear on key global decision-making platforms. In the run-up to the IMF/World Bank annual meetings in October and COP27 in November, a coalition should be encouraged to build consensus, inspire action and rally support for Africa’s unified positions. Such actions will ultimately not only drive reforms in the global financial architecture to better serve Africa, but they will also provide an opportunity to restore and rebuild confidence in international dialogue and action.

As the global financial architecture embraces inclusive, effective and fair reforms, African countries need to be more represented and represented on the governing bodies of key global institutions, including the Bretton Woods institutions. Africa can then be a continent that actively contributes to shaping global solutions rather than suffering from their absence.
Source: World Economic Forum